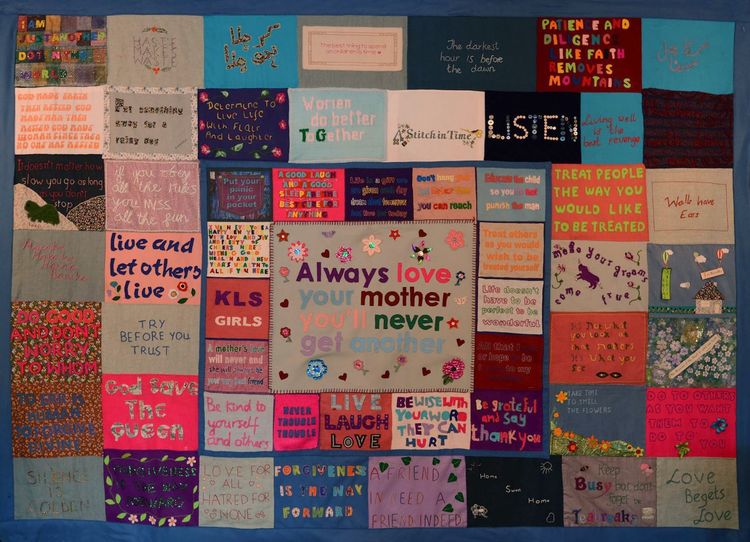 ‘Words of Wisdom’ is a big bold colourful textile artwork made by older people in Wandsworth celebrating their knowledge and experience. The 3m-wide piece is assembled from 50 or so smaller pieces on which individual makers have stitched, knitted or embroidered a saying or piece of advice they value and would like to pass down to others. It was made for Wandsworth Arts Fringe 2018 and was displayed across five venues during the festival. It was shown at St George's Hospital Tooting later in the year. During that time patients, staff and visitors contributed their own words of wisdom which were displayed at various places throughout the South London hospital.

I came up with the idea for 'Words of Wisdom' after making 'Flux' when I recorded the memories of members of the sewing group at the Katherine Low Settlement in Battersea. The group is so full of fun and talent that I wanted to make more work with them but this time in a more collaborative manner. I wanted the project to give them the chance to show off their talents and give them visibility in an arts festival which is usually the preserve of younger people.

'Words of Wisdom' reclaims the notion of the Elder – something that has been lost in our culture. Although we are living longer than ever, thanks to improved healthcare and living standards, there is currently an awful lot of negativity around ageing in our culture. I hope the project offers a small antidote to this perception.

During the Fringe members of the public of all ages including children from All Saints Putney and St Mary's Putney shared their own wise words and made colourful textile panels, some of which have been put together to form further artworks.

More than 30 over 60s from the following organisations took part: the Katherine Low Settlement sewing group, University of the Third Age sewing, knitting and embroidery groups, volunteers from Scrapstore in Tooting, members of the Wandsworth Asian Women’s Association as well as residents from Mount Court in Putney. 'Words of Wisdom' was made with the kind support of Enable Arts.
Next
Previous